Well what a great few hours I had with Michael Petrucci – I found somebody who was just so passionate about McLaren Vale wine and could talk about it at least as much as I could.  What fun! 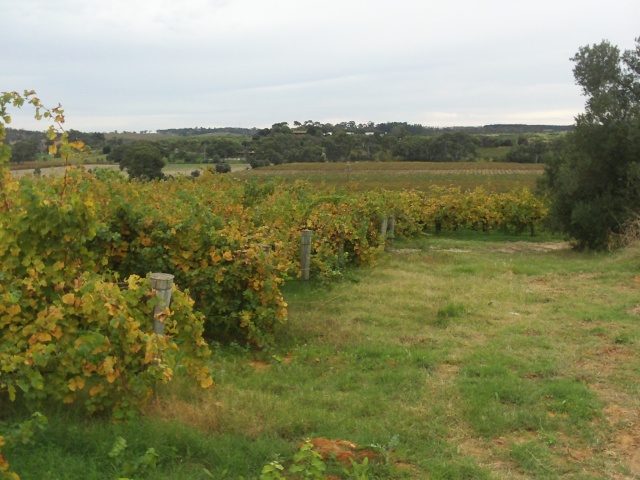 Sabella Vineyards started in 1975 and now have 110 acres under vine.  A number of years ago a decision was made to get Michael into the wine business via wine making.  Instead of rushing this move Michael went to school to learn wine marketing.  Straight away there was a understanding that selling wine was very different to selling grapes.  This understanding has been crucial to Sabella standing out from the pack and not just another grape grower trying to make and sell wine.

The packaging has a label that shows the Statue of Abundance – bit it looks a bit like the Statue of Liberty and gets recognition by this similarity.   All the wines produced have a point of difference to have the wines stand out from what can be a McLaren Vale wine lake.  They are about to release a Merlot under the Marilyn Merlot label and a Moscato is to be released later in the year.

To date wines have only been released every second year.  The reasoning for this is that they are making enough in these years to take 2 years to sell – so why make wine that they may not be able to sell and thus just build up their stocks.  Wine is still made but is sold to other wineries in the area.

Sabella has another point of difference and it is probably their most interesting.  It is their Reserve Shiraz, and it is so different that the process used is patented.  Michael wanted to get the consumer involved in the winemaking process.  Yes, I can hear you already saying – How!  They add a sliver of oak into the wine which will impart a certain amount of oak flavor into the wine.  So where is the customer involvement – the consumer makes the decision when the wine has been subjected to enough oak.  If the wine is left to mature to the point the oak has had maximum extraction then the wine would need time to mature before being optimal to drink.  So again the consumer not only decides when the wine has had enough oak, the consumer also decides on the time the wine should be aged.  To ensure the wood does not come out of the bottle there is a plastic inset in the bottle neck.  On another occasion I have tasted the current release 2004 Reserve Shiraz and was not impressed with how “over oaked” the wine was – so I expect the wine has extracted the maximum amount of wood tannins etc into the wine and now the wine needs to be cellared for a few years for the wine to show it’s best.  I can now better understand the wine I tasted with the correct context.  The next Reserve Shiraz looks to be from the 2008 vintage.

Now for a review of the wines.  Also, check out my video tasting of 2 Sabella wines.

All wines were tasted at room temperature.

Straight way this was different – no strong smells of cut grass or the cats pee (which is good).  I was immediately surprised that the main aromas were a minerallity with just a slight herbaceousness.  The theme continued on the palate with minerallity on the back palate and continues with a good acid length.  The grapes for this wine come from 2 vineyards – the first on a higher location on sandy soils, and the second on a lower section on vineyard in heavy soils.  As one would expect these 2 different soil types and locations have different ripening characteristics.  For this wine the grapes are harvested at the same time and are co-fermented.  This methodology produces a wine with broad flavor profiles – particularly with the aim of a final alcohol level of 12.5%.  The minerallity and acidity lends itself to work well with seafood – maybe a paella.

The aromas were reminiscent of the commercially available Banana Lollies with just a hint of passionfruit.  the banana lolly continued as a flavor (but not as strong as the aroma) combined with crisp green apples.

This wine is expected to be released later this year.  The aromas had some plum but the aromas and flavors were dominated by “Cherry Ripe” which would come from the oak treatment.  The flavors also had some vanilla (from American Oak) with soft tannins.  An easy drinking style but not the real softness that one normally gets with Merlot.  I can imagine drinking this with Pumpkin Gnocchi with a burnt butter and sage dressing.

I did not get any obvious wood interaction on the nose – all fruit, mainly blackcurrent tones.  The flavors continue on the black fruits theme theme (blackcurrent and blackberry) with soft oak overtones and the softness continues right through to the lingering finish.

The soft finish is a conscience play and has been successful with the 2005 vintage of the wine winning the George Mackey Trophy in 2009 for the best Australian Export Wine and in doing so knocked the big producers off their perch (Penfolds have won this trophy for the previous 3 years).

The aromas start with the typical berries you get with McLaren Vale, and end with what I can only describe as the smell of freshly cooked cinnamon donuts.  The cinnamon continues on the flavor profile and I suspect this comes from the cleaver use of oak and the various oak toasting combinations.  The flavors also include the usual plum characters your find in McLaren Vale Shiraz.  As with the Cabernet the tannins are soft and combine into a lingering experience.  Please bring on a steak with this one.